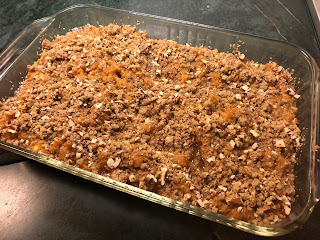 One trick of my new pantry system is that some ingredients can pile up as my menu mix shifts. Sharon found a good recipe to use up some canned sweet potatoes as well as some bananas that were aging on the counter. 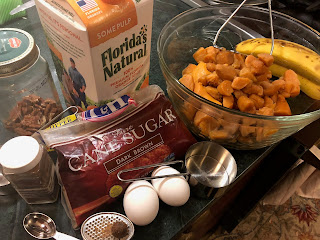 I drained one big can and two little cans of sweet potato which made for 2.5 pounds. These I smashed with a potato smasher.

In a bowl, I beat two eggs, 1/3 cup orange juice, 1/2 cup brown sugar, some spices--1/2 tsp nutmeg and 1 tsp powder forte (for cinnamon), and 3 Tbs of melted butter. This was mixed into the mash.
I diced two bananas and folded them in at the end (if they were over-ripe, I'd have mashed them).

I poured the goop into a buttered casserole dish.

I opted for the pecan crumble topping:
Mix 1/2 cup each of brown sugar, flour, chopped pecans, with 4 Tbs of butter. Then crumble over the top.
Cover with foil, then bake at 350 for 20-25 minutes covered followed by 10 minutes uncovered.

It looked nice in the dish, but didn't serve up very elegantly with a spatula. Next time I might try serving with a large scoop. It would definitely be nice to have something deep green to serve alongside.

The banana worked well in the flavor/texture profile. I could pick out the taste, but it blended in well, certainly better than I initially expected. Would make a nice side dish for a party where you want to change things up a little.

Posted by Jake Vortex at 6:52 PM No comments: 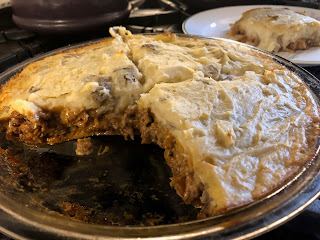 Snowy day, ground beef in the fridge, and half a bag of potatoes -- what a nice day for a shepherds cottage pie! Based loosely on a recipe Sharon found for me. [Update: Evidently a "Shepherds pie" is made with lamb or mutton, as the name implies. If made with beef, it is a cottage pie.]

I browned ground beef, minced garlic, two slices of bacon (diced) and some random stuff from the freezer (roasted beets, squash) until well browned in some bacon drippings and olive oil in a dutch oven over medium-high heat.

Meanwhile, in the instant pot, I made mashed potatoes by scrubbing and chunking half a bag of russet potatoes and adding a cup of beef broth and a dollop of minced garlic. Cooked on "manual" (pressure cooking) for 6 minutes, releasing the steam when complete.

I had several breaks to take in the beautiful day.

When the beef mixture was browned I admixed a can of cream of something (in this case, chicken) soup, a tablespoon of BBQ sauce, a generous pinch of salt, and some ground pepper, long pepper, and grains of paradise.

This was poured into a pyrex pie pan.

The potatoes and stock were mashed with some butter and half-and-half. Maybe a little too much liquid (see later).

I used half the potatoes for the pie topping.

This was not long enough (see picture). Didn't have any browning to speak of.
I kept checking the oven, then wandering off to check the snow, and twitter, and facebook, then back to the oven. Eventually, it browned.

Sliced up well and tasted delicious and comforting.

Next time: A little more peaking on the topping would make for nicer browning.
I also wonder about a little grated hard cheese either on top or mixed in with the last half cup of potatoes to form the top-most layer.
Posted by Jake Vortex at 1:59 PM No comments: 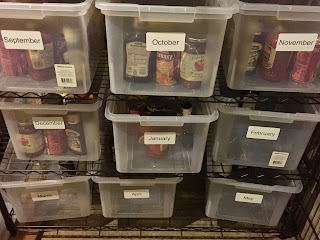 Last month I started a new pantry system. Sharon got me twelve plastic banker boxes and labeled them, one for each month. When I find a good deal on something at the store I buy twelve and when I get home I parcel them out, one in each box. 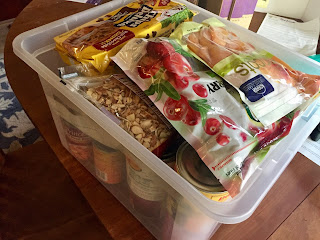 Then at the beginning of each month, I pull out that box and I have a nice variety of items to stock the "near pantry" with to be used that month. I can also take note of which items from the previous box didn't get used. For September, I had one can of pineapple chunks and a bottle of BBQ sauce (though the one in the fridge is getting low). So dinner tonight might well be BBQ string beans with bacon, pineapple, and almonds. I just finished the container of steel cut oats this morning, in the nick of time. 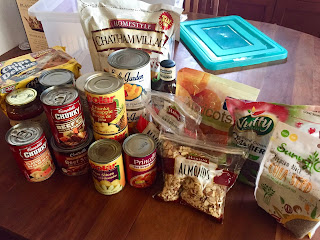 Here are the contents of the October box. Three cans of soup/stew, canned fruit, a can of tuna (I like tuna, but not all the time), some nuts (for us and Mia the parrot), dried fruit, and look at that another container of steel cut oats, just in time. 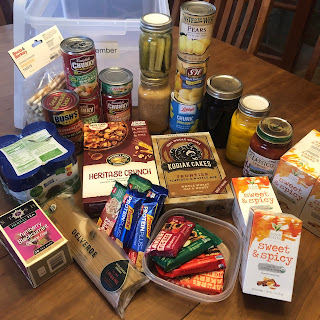 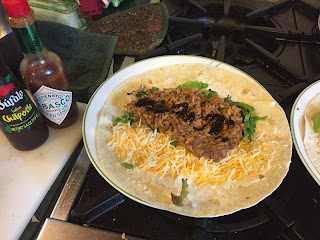 For years we've been wanting to add more beans to our diet but it's a hassle to deal with soaking overnight. The Instant Pot has enabled us to make beans without pre-soaking. We tried a new recipe today from the Allergy Free Alaska blog, Instant Pot Refried Beans.

We didn't have the exact ingredients, so we made some changes to the recipe. Here is what we made. 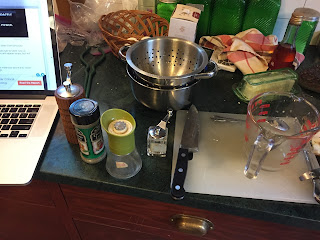 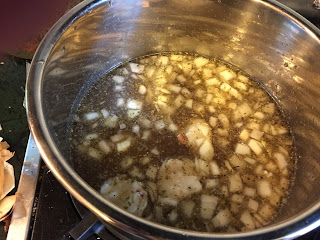 INSTRUCTIONS
In a large mixing bowl, add the sorted dried pinto beans and fill the bowl with enough water to cover the beans by several inches. Set aside to soak for 15 minutes while you prepare the remaining ingredients.
To the Instant Pot bowl, add the chopped onion, garlic cloves, jalapeno, dried oregano, ground cumin, ground black pepper, lard, chicken broth, and water.


Use a colander to strain the beans and discard the soaking liquid. Rinse with fresh water. 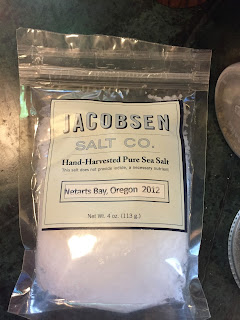 Now add the beans to the Instant Pot bowl, and stir all of the ingredients together. It’s okay if the lard is in a solid lump, as soon as the Instant Pot comes up to pressure/temperature, the lard will melt.
Place the lid on the Instant Pot and ensure the steam release valve is set to sealing. Press the “Bean/Chili” key, which will show 30 minutes of cooking time, and increase the time to 45 minutes. Now walk away. When the Instant Pot is done cooking, it will come down from pressure naturally, about 40 minutes.
When the pressure is released, open the lid of the Instant Pot and add the sea salt to taste. 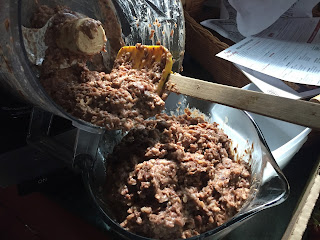 While directed to "Use an immersion blender" I opted for a potato masher to blend the beans to the desired consistency. Then I openly laughed at my hubris, and pulled out the food processor in which I processed half of the bean mixture for a few pulses, then the other half.  The beans will appear soupy, but will thicken as they cool.

Tasted good in a burrito with rice, cheese blend, chopped greens, and yogurt.
Posted by Jake Vortex at 7:35 PM No comments: