We made a large pot of vegetable beef soup mostly following the crockpot recipe at Wellplated.  We used butternut squash, red potatoes and carrots; but we were out of celery. We also didn't put in peas. Otherwise, we mostly followed the ingredient list. 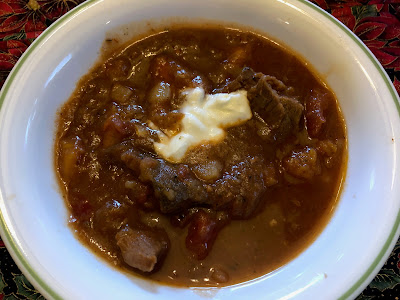 Jeff actually cooked the beef overnight in the Instant Pot on the sous vide setting. We cooked the onions, garlic and carrots on the Saute setting until the onions were soft. Then we added the broth, carrots and red potatoes and set them to Pressure Cook for 5 minutes before adding the rest of the ingredients.
We added the canned tomatoes and roasted butternut squash and set the Instant Pot to Slow Cook for a couple of hours. It turned out quite tasty.
When we make this one again, I don't know that we'd change anything.
Posted by Sharon Kwilter at 8:16 PM No comments:

Jeff made the Bulgur with Roasted Butternut Squash from the PureWow website. 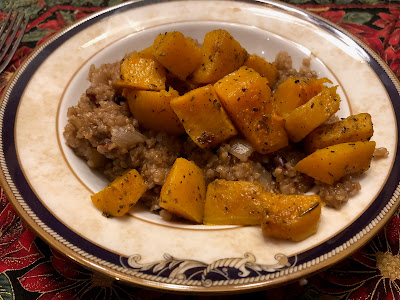 He mostly followed the recipe, but he substituted Herbes de Provence for both the sage and thyme. We didn't have any goat cheese, so he substituted 1 oz of greek yogurt and 1 oz of a 3-cheese blend.
For the dressing, he didn't use balsamic vinegar but instead used fig vinegar.
It tasted pretty good but might not have been worth all the effort. It did, however, achieve the goal of using up the butternut squash and bulgar that had been sitting around in the pantry for too long.
Posted by Sharon Kwilter at 9:58 PM No comments:

Email ThisBlogThis!Share to TwitterShare to FacebookShare to Pinterest
Labels: from scratch, squash

Jeff made a loaf of Chocolate & Walnut Sourdough Bread using a recipe from the Pantry Mama website. 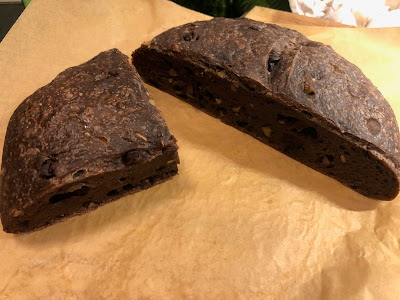 I didn't remember to take a good photo of the loaf before we cut into it.
Jeff followed the recipe, but he omitted the instant coffee. We don't like coffee.
The loaf was reasonably good, but a little strange. It just wasn't a flavor combo we're used to. We might make it again, but more likely we'd just make brownies because they would have enough chocolate to satisfy our need for chocolate.
Posted by Sharon Kwilter at 9:42 PM No comments:

We decided to highlight Quinoa as an ingredient during the month. We have tons in our pantry and it would be nice to use some of it up.
The original recipe is available here at the King Arthur Baking Company website. 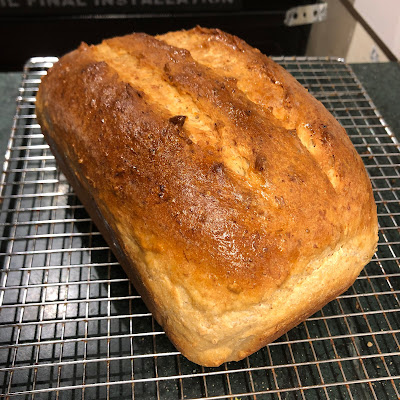 As for changes, Jeff omitted the dry milk and water and instead used almond milk.
It was tasty. If we were to make it again, we would make it exactly the same way!
Posted by Sharon Kwilter at 7:46 PM No comments:

Today we decided to make the Better than Zuppa Toscana recipe from the allrecipes website. To be honest, we loosely followed the recipe. We had less than a pound of sausages in casings so we cut those into fairly small pieces. And we had half the amount of bacon that the recipe called for and we cut that up and threw it in.

We also cooked it in the Instant Pot. Basically, we Sauteed the garlic and onions and then tossed the rest of the ingredients into the pot and added enough broth that the potatoes were covered and set it on Slow Cook then let it cook for more than two hours.

When the potatoes were soft, we added the kale. We always use yogurt instead of sour cream in recipes. 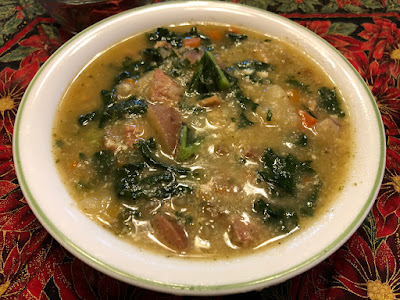 I thought it tasted great. This is another recipe we'd be happy to repeat.

For next time, Jeff would like to take a cup or so, plus the yogurt, and run it through the blender and then add it back to the pot to give the soup a bit more body.

Posted by Sharon Kwilter at 5:53 PM No comments:

Email ThisBlogThis!Share to TwitterShare to FacebookShare to Pinterest
Labels: from scratch, soup, Success 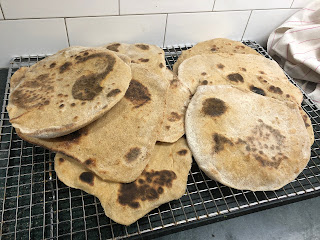 Gave naan bread a try. Sharon found a recipe using sourdough. The one tweak I made was to use white whole wheat for all but one cup of the flour, which was bread flour. Cooked them up on two cast iron pans with the burners set to 6/10. Two minutes on first side, a smidge less on second.

Had a couple with burrito fillings. Folded up like a soft taco.

More double bagged in the freezer for later.

They turned out well.

Next time: I might go with more white flour next time for a little softer bite.

Posted by Jake Vortex at 8:42 PM No comments:

Today, we made Instant Pot Broccoli Chowder. I had originally planned to make the Instant Pot Corn Chowder recipe from Taste of Home but I discovered we didn't have any frozen corn. But we did have quite a lot of frozen broccoli, so Jeff suggested we substitute broccoli for the corn and that's what we did.

We had to defrost the broccoli so we could cut the florets into smaller pieces and we also didn't have any fresh onions, so we substituted dried minced onions. Otherwise, we simply followed the recipe as it was written. 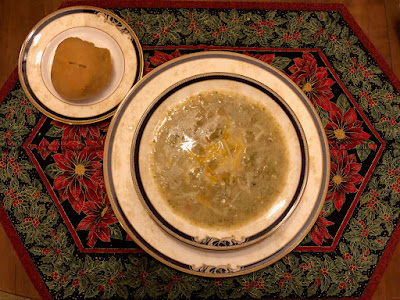 The light isn't good in the dining room so it looks rather unappealing in the picture, but it tasted delicious. I sprinkled a little salt on mine, but Jeff liked it as is.
If we make it again, we would run a portion of the chowder through the blender after the pressure cooking to eliminate some of the chunks and make the chowder a little more creamy. This recipe is another keeper.
Posted by Sharon Kwilter at 7:51 PM No comments: