I often refer in my blog posts to spice blends that I am much more likely to use than any particular spice called for in a recipe. The following mixes were all taught to me by Friday Valentine (aka Rafaella d'Allemtejo in the SCA). The ratio's are all my own. Feel free to adjust ratios to your own taste. Here is a summary of the blends I use most and where I typically substitute which:

Substitute anywhere Black Pepper is called for, especially when high heat will be used. 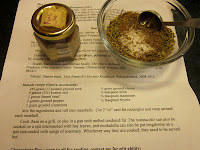 Substitute for salt & pepper when roasting meat of vegetables.

Substitute where cinnamon, ginger or black pepper are called for and the other flavor notes would not go amiss.

Substitute where black pepper is called for.

The Spices:
These days I get most of my spices from Savory Spice Shop here in Portland. But I looking for a new source for cubes (AKA Tail Pepper) and galangal.
I usually buy whole spices where possible and grind them as needed.
I try to only make enough of any given mix to last me for six months or so.
When I run out of something I tend to make up batches of each mix that is running low.
I use a coffee grinder for most of my spice grinding, except for nutmeg, for which I use a microplane.