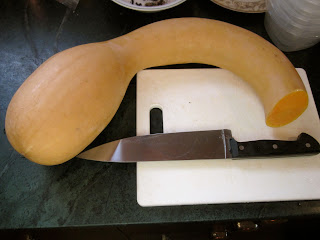 I still have (well, had) two tromboncino squash fruits from last fall's harvest.

I have been impressed by how well they have kept over the winter. I just had them set on a shelf in the basement. I've had a couple of them develop a little bad spot at the end that then starts to rot. Once I cut that part off the rest is in good shape. 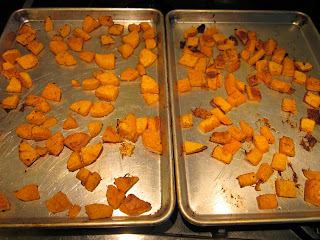 Read more »
Posted by Jake Vortex at 3:00 PM No comments:

So when I posted about the chocolate chip cookie fail, one thing I didn't get a picture of was how strange the caramel + brown sugar + butter + eggs looked. The butter clarified and didn't fully incorporate into the caramel.

This is what creamed butter, sugar, and eggs is supposed to look like ... 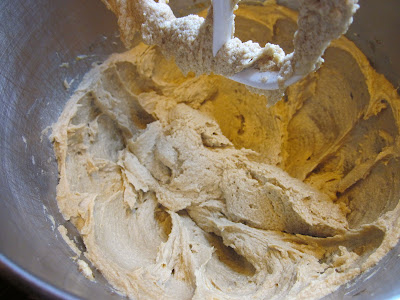 I wish I better understood the chemistry of what is going on with this magical concoction when making cookies.

Update: I got a great comment from donaleen about a Baking 911 blog post that goes into great detail about creaming butter and sugar and the considerations of the temperatures involved. Well worth a read. 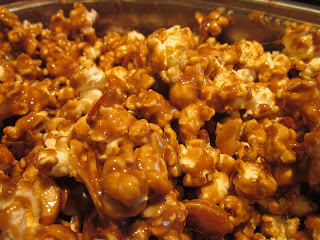 One more go at caramel popcorn. This time I stayed pretty close to the original recipe, except for adding slivered almonds to the caramel right before the pour. No chocolate. No bacon. Just wanted to get a simple baseline. 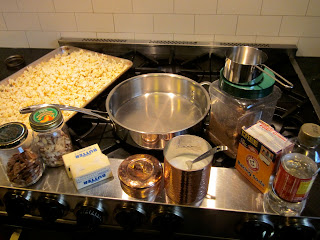 Time to start a new list of things to try:

Posted by Jake Vortex at 1:44 PM No comments:

Email ThisBlogThis!Share to TwitterShare to FacebookShare to Pinterest
Labels: experiment, next time, plans

Well, mostly from scratch. And sorry in advance for the lack of pictures.

We had some lovely carrots in three colors from our CSA that I wanted to use, but we had a busy day doing stuff, so I went with default plan: coarsely chop, roast at 425 in olive oil and roasting salt, checking every 10 minutes until they were done.

While that was going on I chopped some small onions and sautéed them in the soup pot in some bacon drippings.
When the carrots were done (about 20 minutes, though they could have gone a little longer if I wasn't so hungry),
I added them to the pot.
Then some chopped turkey breast.
Then some chopped oven-cooked-then-frozen bacon.
Once that got all nicely up to temp, I added some almond meal and a little bit of mashed potatoes (because I had them and need to eat them and don't really want to sit down to a giant pile of mashed potatoes).
Then I tossed in some frozen squash. Wasn't planning to do it. I just did. That's how I roll.
Over it all I poured in one 28 oz jar of homemade chicken broth that I had heated in the microwave.
Once that got good and steamy I added another 28 oz of hot water.
Turned it down to low, covered, and let simmer.

Later, I put half of the soup into the Cuisinart food processor with a TBS of Herbs de Provence.
Added this back in and served over 1 TBS of sour cream.
Made six hearty servings.

I've been trying to figure out how to cost out a dish like this. I'm not sure what to do about the carrots, which were part of our CSA basket. Or what to do for the chicken stock, which was made from the bones and leftovers from a roast chicken we had a couple days ago (and more veggies from the CSA). I think it worked out to less than $1.50 per serving all told. Which doesn't seem fantastically cheap for homemade soup, but seems reasonable considering the quality of the ingredients and that it tasted really good. ;-)

In particular, I'm glad I added the potato and almond meal. Neither came through as a distinct element in the final soup, but I think they added to the richness of the broth.

Posted by Jake Vortex at 6:53 PM No comments: 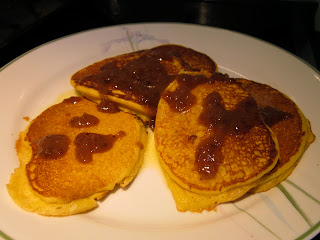 I was in a "no recipe" mood this morning, and my wonderful wife asked for pancakes. (Go ahead, twist my arm.... OK, you can stop now. You had me at "pancakes").

Today I wanted to go with something a little eggier and to experiment with whipping the egg whites. 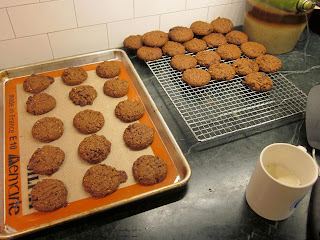 I am perhaps overly enamored by caramelization.

It just seems so magical. So why not caramelize sugar every time you use it? What could happen? 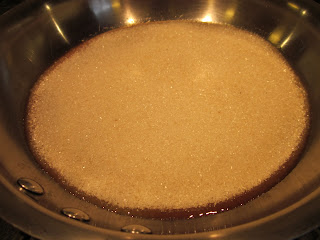 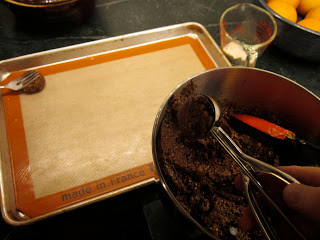 Read more »
Posted by Jake Vortex at 3:00 PM No comments: 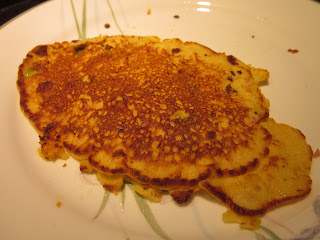 I have a steady stream of potatoes coming in from our CSA so we cooked up our backlog into mashed potatoes. I have been trying to come up with some new ways to incorporate them into other meals as an ingredient. 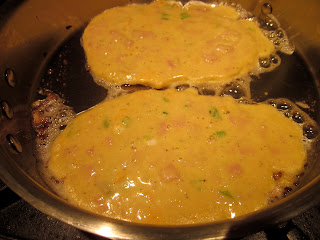 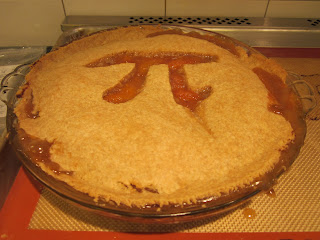 In the summer, when the fruit is at the height of its season we like to buy a crate or two of peaches or apricots and make up a bunch of pie fillings that we stash away in the freezer to be used through the winter months. Pi Day is an excellent excuse to pull one of these buried gems from the cellar, make up a pie crust and have some pie.

Read more »
Posted by Jake Vortex at 6:39 PM No comments: 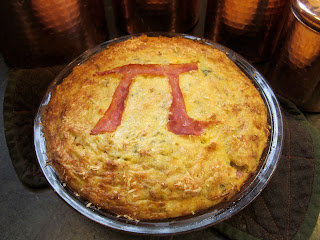 In honor of Pi Day I wanted some pi themed lunch. With mashed potatoes staring me in the face as I opened he fridge I wondered about a potato frittata, or rather, a pi-tato pi-ttata! 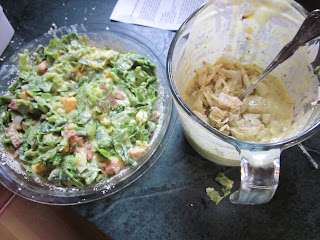 Read more »
Posted by Jake Vortex at 1:59 PM No comments: 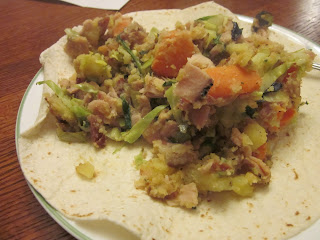 Here is another take on a veggie scramble of winter veggies. This time with potatoes.

I parboiled the carrots and potatoes, cut into chunks, for long enough to become fork tender. I chopped the greens pretty fine so it wouldn't feel like the same dish I did earlier.

And of course bacon. Because bacon.

Posted by Jake Vortex at 3:00 PM No comments: 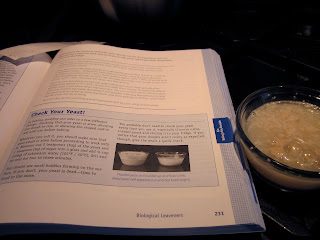 Progressing through Cooking for Geeks

, I got to do an interesting experiment with yeast. To test if your yeast is good put 2 tsp of yeast and 1 tsp of sugar in a half-cup of warm (105 degree) water. Then wait for it to bubble up. 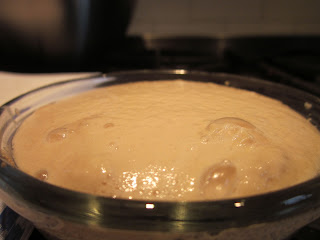 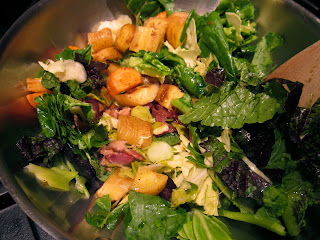 I've been cooking so much "brown food" lately that I thought it would be good to show something green. We chose our CSA in no small part because we wanted one that continued through the winter. This time of year that means lots of root veggies and cooking greens.

I sautéed some leeks, tossed in some roasted carrots, some oven-cooked bacon, and finally some coarsely chopped greens. 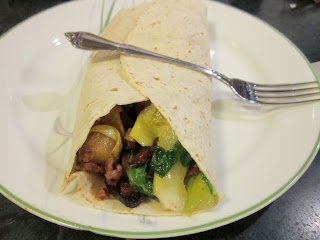 Once the greens just started to wilt I added a quarter cup of almond meal, a Tbs each of lemon juice and soy sauce, tossed and covered for a minute to steam a little.

Then I served it up on a tortilla.

Posted by Jake Vortex at 3:00 PM No comments: 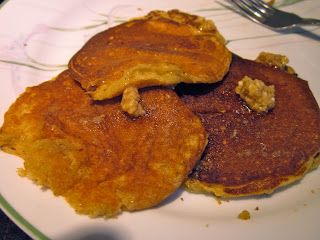 I like incorporating a lot of almond meal in my cooking. I have tried waffles with almond meal in place of flour and they didn't hold together very well.

This time thought I'd try pancakes with half the flour replaced with almond meal. This worked well in terms of texture, browning, and flavor. The one problem was that they were quite tricky to flip without them tearing and breaking up. 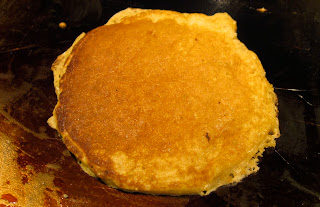 They browned up nicely.

To top them, I mixed up some butter, maple syrup, and a little pomegranate syrup. This tasted nice, but I needed to warm the butter a little to get it to blend better. 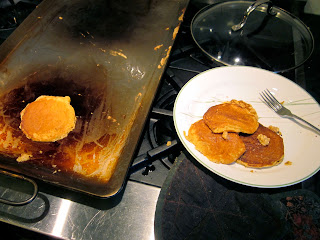 Next time: I wonder if I made the batter a little thinner if that would make them easier or harder to flip. I think part of the problem was that the inside was staying too tender to hold together.  It also seemed to work a little better to make three smaller cakes rather than one large one at a time. 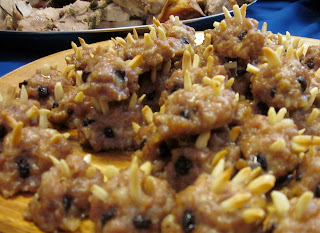 We had a potluck SCA event today. I wasn't sure what to bring, so I went with an old stand-by: hedgehogs!

I like them with currants much better than when I made this before with raisins cut in half (if I recall correctly). They were the perfect size and nice and firm and none of them popped out during the baking process.

Read more »
Posted by Jake Vortex at 7:34 PM No comments: 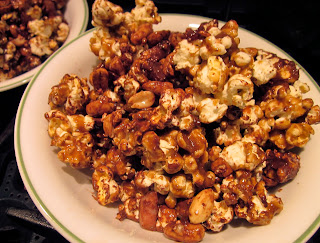 My second attempt at caramel bacon popcorn went better than the first. I again worked from the Grandma Paula caramel corn recipe. Except I cut the caramel sauce in half since I didn't think I was making enough popcorn. (In retrospect, I found this to be in error).
Read more »
Posted by Jake Vortex at 3:00 PM No comments: 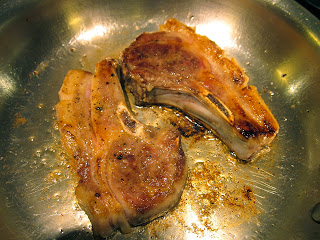 I wasn't sure how to cook lamb chops, so I thought I would treat them with my favorite (well, only) recipe for pork chops.