We've been getting biweekly fruit deliveries from Organics to You for a few months. Since we had built up a bit of a collection of different varieties of apples and pears, I decided I wanted to try making an apple-pear butter (if such a thing existed). With a quick google search, I found plenty of options.

Ultimately, I adapted a recipe from recipe.com for the version I ended up going with. We only had about 4 pounds of apples and pears, so I had to modify it. 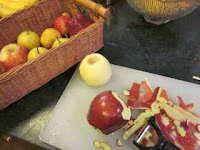 (I substituted 1 Tbsp of Jeff's powder deuce for the ground spices.)

I peeled and sliced the fruit with the food processor, added the rest of the ingredients, then cooked it on the stovetop for about half an hour. 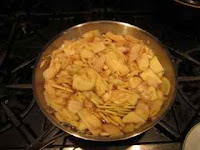 I had been expecting the fruit to soften and break down, but it didn't go quite as I was hoping. So, eventually, I ended up passing the cooked fruit through the food processor again. Then it had the consistency of apple sauce and I returned it back to the stovetop to cook it down.

I let it simmer for about 45 minutes or so over low heat, stirring occasionally, until it was good and thick. Then I transferred the apple pear butter into jars. It cooked down to just over 2 pints, so I didn't bother to cook it in a hot water bath. I'll just pop the jars into the refrigerator. 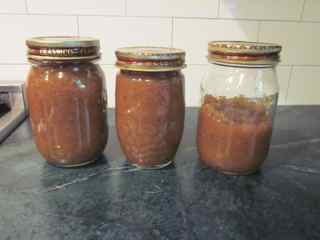 Posted by Sharon Kwilter at 7:59 PM No comments:

Email ThisBlogThis!Share to TwitterShare to FacebookShare to Pinterest
Labels: canning

We've been experimenting with low-carb stuff.
So I wanted to make burgers, but decided to skip the bun.
Mixed into the ground beef some wheat germ, almond meal and grated Romano cheese.
While I was grilling the patties I grilled some onion slices on the side. 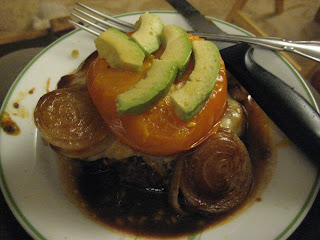 After flipping the burger I put on a little BBQ sauce and a slice of cheese.
When the burger was done I put a little water in the pan and put a lid on to melt the cheese.
Garnished with a slice of tomato and some slices of avocado.

Had to eat with a knife and fork, but other than that it seemed to fill the burger need.
Posted by Jake Vortex at 11:54 PM No comments:

I got a nice looking whole chicken roaster from Natures. I don't recall ever actually roasting a chicken so I decided to try an simple whole roast chicken recipe. 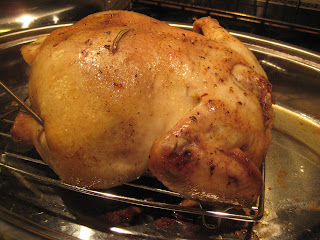 I coated the raw chicken with a mixture of salt, sugar, and Powder Douce.
I let that rest in the fridge for a day.
Then stuffed the cavity with 5 crushed garlic cloves and 5 sprigs of fresh rosemary from the garden.
And roasted in a preheated 500 degree oven for 15 minutes.
Then down to 450 for 15 minutes.
There were no drippings to speak of. so after about 15 more minutes at 425,
I basted with 1 Tbs of melted butter.
Then 15 more minutes.
The temp probe wasn't up to 180 yet, So it took 10-15 more minutes for the temp to read 180.
Then out of the oven to rest for 20 minutes.

After removing the wings, I cut it in half lengthwise and served each half on a plate.
That was a lot of food!
We ate most of the white meat, but ended up not touching the thighs and drumsticks.
We took the meat off them and put it in the fridge for tomorrow.

With the carcass I am working on stock, based loosely on an Alton Brown recipe.
Posted by Jake Vortex at 8:56 PM No comments:

I've been suffering from a bit of insomnia, so it totally wiped out my energy this week; I hardly managed to do anything productive. Today, however, I finally had some energy and I decided I wanted to deal with our growing pile of tomatoes. Between our CSA and our tomato plants, we had a pretty large backlog. 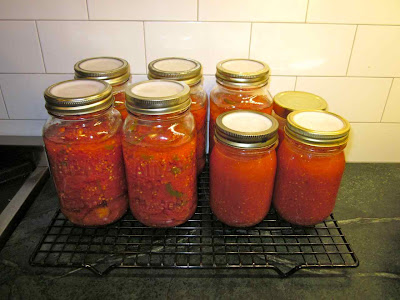 I first made a batch of tomato sauce. Since I mostly used cherry tomatoes, I used the easy method where you just throw the clean tomatoes into the food processor and turn them into juice then cook them down until they're sauce. (I found the method at this website.) I turned five heaped pint baskets of tomatoes into three small jars of sauce.

Then I did a second batch of diced tomatoes from the larger tomatoes. (I used the method from this website.) I peeled the tomatoes and Jeff cut them into small pieces for me and added a bit of basil from the garden. Then we added lemon juice and put the cut tomatoes into the jars. Though, I don't think we smashed the tomatoes down enough in the jars, so there's a big gap now at the top. So, I don't really know if they worked or not. They all sealed, so perhaps they're OK. I may pop them into the refrigerator just in case.

I have finally gotten the hang of using the reusable canning lids. It's best not to put the rubber seal part into the hot water bath because it expands and then doesn't fit jar properly. I just keep them at the side and add them as I put on the plastic lid. The rubber ring doesn't come in contact with the food.

Posted by Sharon Kwilter at 6:30 PM No comments:

I hit upon a summer sauté that was a hit with the wife.
I didn't measure anything, so these are my best estimates ...

The cheese, sour cream, almond meal, and juices from the veggies combine to make a creamy sauce.
Posted by Jake Vortex at 8:15 PM No comments:

We had a couple friends over for dinner on the day our CSA basket arrived. Let's see what I concocted... 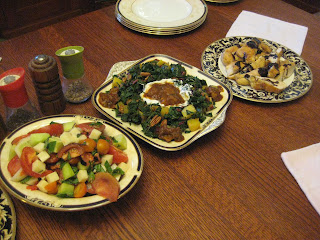 
Overall, I was pretty happy with the meal. In particular, the squash and greens was a nice experiment. I like the pale yellow color with the deep greens. Our guests seemed to have fun experimenting with grains of paradise and long pepper in grinders at the table.

Posted by Jake Vortex at 9:51 PM No comments: