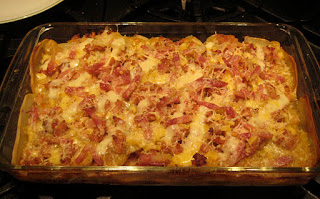 I had some pork sausage and some potatoes that I wanted to cook. So after a little googling, I found an interesting looking recipe for Sausage Potato Casserole.

I mostly followed the recipe, except I used cream of potato soup rather than cream of mushroom. And I added some spices: ginger, galangal, grains of paradise, long pepper, and cubebs. I used a little more potato and pork than the recipe called for so it ended up being three layers rather than two. I thought about using a larger dish, but I like the added thickness. 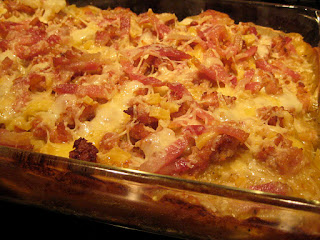 For the topping I couldn't find my block of cheddar (which, as it turns out was hiding in the back of the fridge right about where I thought it should have been). So I used some smoked gouda, parmesan, romano, asiago, and bacon for the topping.
You end up with something that seems like lasagna meets a baked potato with everything.

Next time: I might be good to serve with a little daub of sour cream (or tangy yogurt).