Chicken Cacciatore for the Instant Pot

Tonight Jeff made the Chicken Cacciatore recipe from the allrecipes website. It was quite tasty. Unfortunately, I forgot to take a photo. It pretty much looked like the photo on the website.

We definitely wouldn't mind having this recipe again. I'm not sure we would change anything the next time around.

Posted by Sharon Kwilter at 10:35 PM No comments:

We decided to give a new recipe a try today: Lentil Chili. We mostly followed this recipe, but we used a large can of diced tomatoes, rather than cutting up whole tomatoes. We added three cups of broth and the juice from the tomatoes and it was definitely not enough. 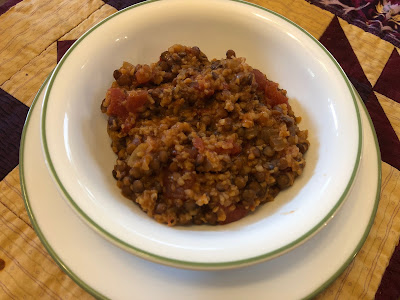 We cooked it in the Instant Pot for at least three hours and the lentils were very slightly undercooked, I believe because there was not enough moisture remaining in the pot. It did taste reasonably good and was filling, but it was not the most attractive meal. I think we'll actually use the rest of it as burrito fillings.
If we make this again, I would definitely add at least four cups of broth, perhaps more.

Posted by Sharon Kwilter at 8:15 PM No comments: