Turkey soup with potato and apple

We had some family visit that brought us a turkey carcass (i.e., the leftover bits after carving a cooked turkey). It is not everyone that knows us well enough to know that a turkey carcass would make a lovely host gift. It wasn't half an hour before I had some turkey stock simmering away.

The Stock
In a large pot, pour a little olive oil and over medium heat cook until soft


Then add ..
Meanwhile, use a mighty cleaver (or poultry shears) to cut apart the turkey carcass and cut through the bones exposing the yummy marrow bits inside. Reserve any large hunks of meat for use later in the soup.
Add enough hot water to cover (about 8 cups), bring to a boil then simmer until it be enough.
Strain. Pour into mason jars, cool, then refrigerate.


It made three mason jars of stock.

Read more »
Posted by Jake Vortex at 1:07 PM No comments:


I mentioned before that I wanted to experiment with increasing the humidity in the oven while baking my sourdough rolls. Here is the way not to do that.... Preheat the oven to 450 degrees with a pyrex pie pan on the the shelf below your baking shelf. Then add hot (190 degree) water. Observe the pie pan dramatically shatter from the sudden 260 degree differential thermal shock.

Preheat the oven to 450 degrees with a metal baking sheet on the the shelf below your baking shelf. Then add hot (190 degree) water. It still doesn't like it, but it seemed to deal with it.

Anyway, it did cook a nice roll. Though the browning was uneven which didn't seem to happen without that addition of the water to the oven.
Next Time: Probably best would be to not bother to preheat the pan but rather place it in an already hot oven, then add the hot water. I should make sure the pans are centered, and I could try turning the pan half way through. 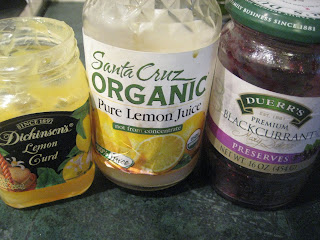 For pancakes, waffles, and the like, I like to make quick fruity syrups. One combination that Sharon mentioned she liked was made by combining in a microwave-proof cup


A dollop probably works out to 2-3 Tbs -- (literally a heaping soupspoon in my case).
Nuke and stir alternately until it was hot and well blended (took a couple three 11-second bursts). 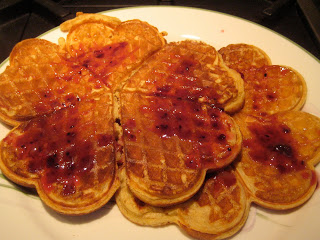 Apply liberally to your target of choice -- in this case sourdough waffles made like my sourdough pancakes with the addition of 1 Tbs of olive oil.

I've mentioned in a couple of posts that I like my Silpat mat.
I have seen friends that use something similar and seemed to like it.
Then I realized that it would save me from using parchment paper of which I was using more and more. 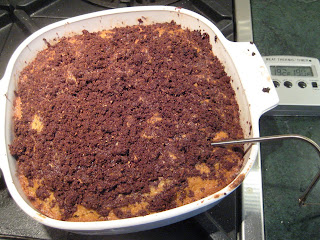 I started with a recipe I found online for sourdough coffee cake, but used whole wheat pastry flour in place of all purpose flour. I also added a diced apple and a quarter cup of hazelnut meal to the batter. I spiced the batter with nutmeg, galangal, orange extract, a splash of orange juice and a drop of orange oil.
For the topping I used 1 Tbs of butter and 1Tbs of sesame oil, spiced it with fresh ground cinnamon and salsa fina (fine spices), added a quarter cup of almond meal and then completely lost my mind and threw in a quarter cup of dutch process cocoa. I think I will regret that last move. Maybe a Tbs would have been interesting. 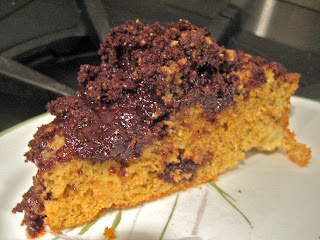 I've had pretty good responses from tasters of my Chocolate Crinkles. I mostly follow the recipe (gasp) except I use 1 cup of white whole wheat flower and 1/2 cup of whole wheat pastry flour rather than all purpose.
The last time I made them I made a double batch which worked ok, except I ended up with a lot of left over powdered sugar. Making these makes me want to get some of those little ice cream scoops that you can use for cookie dough.
I bake them on a half sheet with a Silpat mat that I have become quite fond of. It makes cleanup easy and the cookies release nicely. The one hitch is that we haven't figured out how to dry them since they are so floppy.
I tend to cook them on the short end of the time range so they end up almost like individual chewy brownies. If you cook them longer they allegedly crisp up. This might make for a better dunking cookie, though these do fine with a side of milk. 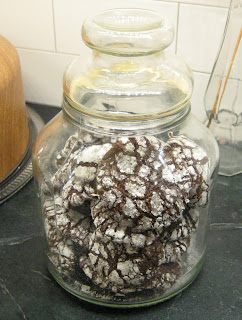 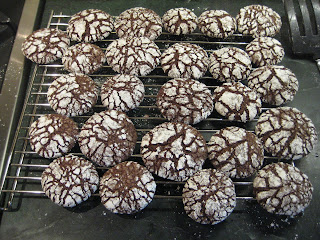 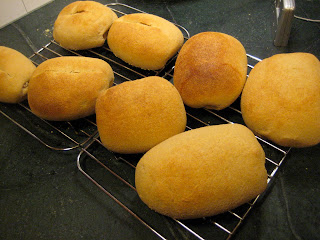 Started another batch of Classic Sourdough Bread to use to make  more sandwich rolls. I actually started the sponge last night with a cup of starter and three cups of white whole wheat flour plus 3 T of wheat gluten and 1 1/2 cup warm water. This morning I added two more cups of flour, 1 T each of sugar, salt, and orange juice.
After kneading in the stand mixer it is resting. Next I will divide it into eight parts and form them into balls. They get to rise again in the pan on the silicone mat. We'll see if I can remember to slit the tops before they go in the oven this time.
The photos are from the last batch I made. Since the recipe is for two loaves, I bake until the internal temp is 190 and I have some nice browning. 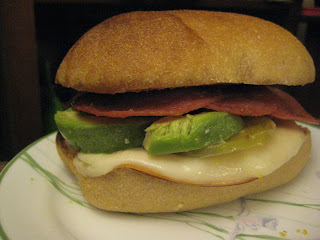 Read more »
Posted by Jake Vortex at 9:15 AM No comments: 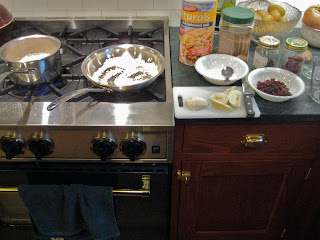 On a chilly morning I like to make fruioatmeal (pronounced FROHT-meel) which is my name for oatmeal made with fruit and nut meal.

Read more »
Posted by Jake Vortex at 9:50 AM No comments:

I have a sourdough starting going which yields a cup of starter a day. Some days I'm not up for baking, so sourdough pancakes are in order. Today I added 1 cup of starter to 1 cup of my pancake mix, and egg, a splash of orange juice, some cocoa nibs, a half cup of toasted almond meal, and a quarter cup of warm milk. Let the batter sit for half an hour. Then fried them up.

Email ThisBlogThis!Share to TwitterShare to FacebookShare to Pinterest
Labels: sandwich

Why another food blog?

I rarely follow recipes, though I often start with them. My hope is that this blog be a place where I can record a journal of what I've tried and what did or did not work, and thoughts of what I might "want to try next time". I also want to be able to share my notes with other foodies as well as field requests for "could you send me the recipe for that".

Biases:
Well enough prose, on to the food poetry...