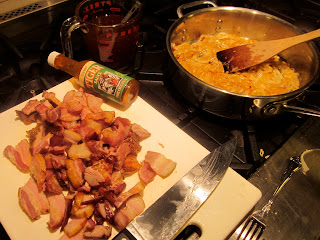 I was camping with a buddy of mine and he pulled out some bacon butter. Wow. Just wow. So I sought out the recipe and here is my first attempt. 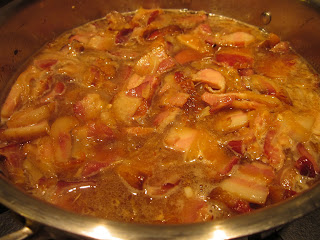 I made a couple of tweaks from the original ingredient list.

Cook in oven at 425 until browned, then set aside to cool, move drippings to heavy sauce pan:


In the drippings on the stove cook for 10-15 minutes:


Cut the bacon into 1-inch pieces.
Add the bacon back in as well the following:


Bring to boil and reduce to simmer.
Cook 3-4 hours, stirring between episodes of Deep Space 9.
Let cool.
Pulse in a food processor until finely chopped.
Put in a covered container in the fridge over night.
In the morning, use a spoon to remove most of the fats on the top.
Return to pot to low heat add:


Adjust seasonings to taste.
Cook until most of the liquid has evaporated (about 45 minutes).
Let cool and put into jars.
Make two 4 oz jars. 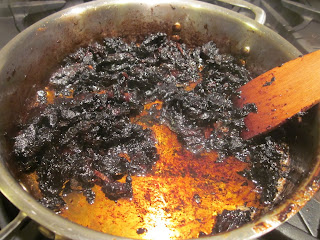 That was the plan.


I think I should have used a tall sided sauce pan and not my low wide 12" skillet.
About an hour into the simmering the bacon mix was basically charcoal. I still had a good 3/8" of fat in the bottom of the pan so it wasn't that the pan had gone dry. I was stirring every 20 minutes on the lowest heat.

It did make the kitchen smell fantastic.


Make the bacon in the same pan as I do the cooking.
Use a sauce pan and not a skillet.
Keep a closer eye on the simmering.
Posted by Jake Vortex at 3:28 PM